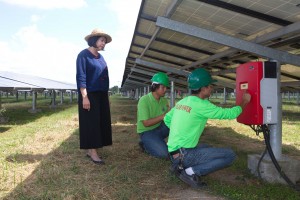 2015 is a big year for the climate change agenda. In December, negotiators will descend upon Paris to sign a new universal and legally binding treaty to tackle the issue. Yet as oil apologists and environmental campaigners dispute the impact of greenhouse gas emissions, business people are seizing the advantage of government subsidies to profit from an explosion of renewable energy. In ASEAN, one woman is beating the path men fear to tread. BY MARK BIBBY JACKSON

“Thailand is on the verge of a solar energy transformation,” says the UN’s Framework Convention on Climate Change (UNFCCC), the body responsible for climate change talks. “The woman leading the country down a cleaner path is Wandee Khunchornyakong,” the organisation continues.

The UNFCCC recognised Dr Wandee Khunchornyakong under its Momentum for Change: Women for Results scheme at its climate change conference held in Lima last December for “activities that demonstrate the critical leadership and participation of women in addressing climate change.”

Not that the woman behind this solar revolution has allowed such accolades to go to her head. “The sun has been very kind to us,” she says as she signs off on a stack of files while answering my questions in her office high above the Bangkok skyline. With a planet to save, Dr Khunchornyakong does not have the time to devote herself to just one task at a time.

Maybe not a planet, but certainly a country. With its power sector dominated by fossil fuels, Thailand saw its greenhouse gas emissions grow by almost 70 percent between 2000 and 2010, according to the UNFCCC. The solution lay in the country’s endless supply of sunlight.

Dr Khunchornyakong’s Solar Power Company Group (SPCG) has constructed a total of 36 solar photovoltaic farms in sunny, northeast Thailand, producing 250MW of installed capacity by the end of 2014. “This translates into potential savings of 200,000 tonnes of CO2-equivilent per year compared to Thailand’s fossil-fuel driven electricity generation,” states the UNFCCC. The performance of her solar farms has been 20 percent higher than predicted.

With net monthly profit (from the first 22 farms) running at 45.5 percent, according to company data, the solar market is clearing booming. Yet, when Dr Khunchornyakong first visited the Provincial Electricity Authority to purchase a solar farm licence, most people thought she was crazy.

“At that time nobody believed grid-connected solar systems could work commercially,” she says. Instead of ending up with one licence, she walked out with 34 – two further licences were added at a later date. It was then that her troubles really started. She needed financing.

It took her three months just to get the banks to listen to her, and then she received the stock response of “we have no policy on this.” This only served to steel the resolve of the Woman Entrepreneur of the Year 2013, as voted by the Asia Pacific Entrepreneurship Awards. “I believed it was my duty, that it was possible, so I had to prove to people that I could do it,” she says.

Eventually, she knocked on the doors of Kasikorn Bank in January 2003. “If I can not borrow money from you, then you will have to change [the colour of your logo] from green,” she told them. Kasikorn means green in Thai and, fortunately for both SPCG and solar energy in Thailand, its logo remains that colour. In total, SCG has managed to secure $800 million worth of investment for the solar farms, and has plans to issue a bond for $3.4 billion to refinance its equity bond.

SCG’s growth is part of a national surge in solar energy, which has seen capacity increase tenfold between 2011 and 2013 to nearly 500MW with SCG accounting for 25 percent of the total, according to the UNFCCC. The most recent Renewable Energy Policy Network for the 21st Century report states that the solar photovoltaic market growth in ASEAN is “dominated” by Thailand.

With natural supplies of gas in the Gulf of Thailand running out – Dr Khunchornyakong estimates it will be exhausted within five to seven years – she sees solar power as being essential for the energy security of the country. Ultimately she would like to see solar capacity rise to 6,000-7,000MW, and represent some 40 to 50 percent of the total energy supply. The current goal is for renewable energy to be 25 percent of total within 20 to 25 years.

“It’s very difficult for people to accept nuclear in Thailand,” she says. “People are against coal power generation. I think a mixed energy solution is the best.”

One of the advantages of solar photovoltaic energy is that it can be both large- and small- scale. It can also be introduced to rural areas that are currently off the grid. She believes that this could be attractive to investors in neighbouring countries such as Myanmar and Cambodia where much of the electricity supply is reliant upon diesel generators. The UNFCCC states that only 13 percent of Myanmar’s population has access to the grid, leaving more than 43 million people either going without power or reliant on diesel generators, which are both expensive and polluting.

Although SCG does have plans to work with “local people” in Myanmar, Dr Khunchornyakong is not yet in a position to provide further details. As for Cambodia, she remains open to offers.

For the moment though the Solar Queen is turning her attention towards solar roofs, which she believes represent a huge market in major cities such as Bangkok. “It’s getting critical; at peak times the feeder is fully loaded,” she says. “We have to manage in order to keep the city working.”

Dr Khunchornyakong believes that introducing legislation, such as exists in Japan, obliging all new constructions to have solar roofs as well as re-charging units for electric cars is essential for a sustainable modern city life. The solar panels would be able to top-up the grid during peak times. She also claims that they pay back the initial outlay within eight to nine years.

Whether it’s expanding her network of solar farms into neighbouring countries, or developing a solar roof empire, one thing is for sure, Dr Khunchornyakong will always be looking to ensure that we all have a future. “It’s our duty for the next generation,” she says, as she signs off on her final file.

POWER OF THE SUN

A joint report prepared by The Organisation for Economic Co-operation and Development (OECD) and the International Energy Agency (IEA) states that “solar energy could provide a third of the global final energy demand after 2060” – good news for developing countries in the southern hemisphere that are blessed with copious sunlight. “Its availability is greater in warm and sunny countries – those countries that will experience most of the world’s population and economic growth over the next decades,” the report adds.