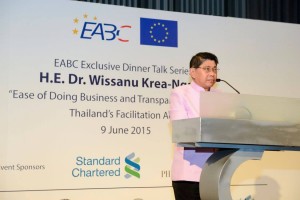 
“Faster, easier and cheaper,” so promised Thailand’s Deputy Prime Minister Dr. Wissanu Krea-Ngam of the government’s new Licensing Facilitation Act. The law that was passed in January will come into practice in July, following the statutory 180-day notice period.

Speaking before the European Association of Business and Commerce (EABC) at Bangkok’s Sofitel So Hotel on June 9, the Deputy PM said that the law would “strengthen transparency and accountability in a very tangible way for every government consideration process.”

According to Dr. Krea-Ngam, there are currently more than 500 laws that require permission from the government spanning 2,500 activities. The aim of the new law is to streamline the approvals process and to establish exactly who is responsible for granting the licence, how long it will take, what documents are required and what is the cost.

“The law provides a strong incentive for agencies to perform,” announced Dr. Krea-Ngam. “It goes further by carrying a big stick, and specifies punitive measures in terms of disciplinary action and criminal charges for negligence and corruption.”

The Deputy PM stated that the new law was part of a comprehensive reform programme being carried out by the government. “Our goals are far reaching,” he said. “Every government agency, state owned enterprise, state financial institution and local administrative organisation or local government unit falls under the purview of the reform programme.”

The legislation has been introduced in order to address “past criticisms on property rights, rule of law, red tape, corruption,” Dr. Krea-Ngam added. It will also be subject to review every five years in order to assess whether government approvals are still required.

The legislation was welcomed by the assembled business leaders.

“We are always looking for more transparency to make doing business easier for companies here, so I think it was a very good step forwards for Thailand,” said Rolf-Dieter Daniel, President of the EABC and General Manager of Staedtler. “It makes us more confident and we see it as a sign in the right direction. I think that is a very important thing.”

Daniel believed that Thailand remained a promising country in which to do business. “We [the EABC] have been here for many years and we do good business here,” he said. “We are very positive. Thailand with its strategic location can easily develop itself to become the business hub and gateway to ASEAN.”

Currently the European Union is the largest investor and the second largest trading partner in ASEAN.

Dr. Krea-Ngam also announced that the Licensing Facilitation Act was the first in a series of legislation that would simplify doing business in the country, something which Daniel also welcomed.

“The Deputy Prime Minister said that the next one will be the Procurement Act, and that is also a very important step,” he said.