What Else Can We Do? 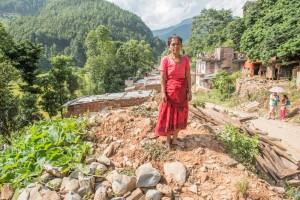 The earthquake that shook Nepal in April inspired a massive outbreak of support from around the globe. Six months on, many of the victims are still homeless and waiting for a “miracle.” Words by Mark Bibby Jackson. Photos by Nathan Horton.

In the small village of Hattigauda, Dipkumari Shrestha, 51, stands amid a heap of rubble. Six months earlier these stones formed the two-storey house in which she lived. On April 25, she was visiting the local market in Trishuli when disaster struck. She fainted when she saw what had become of her home. Tragically, she soon discovered that her mother and six other members of her extended family had died in the earthquake.

“I wish I had my parents so they could look after me. I feel alone,” she says, tears welling in her eyes. Her father had died some time before, leaving her as the head of the family.

As such she received the 22,000 rupees (approximately $205) that most, but not all, households have received as compensation. This money allowed her to build a wall at the foot of the hill, which she is using as a compound. She still lives in make-shift corrugated iron accommodation that was provided to victims in the aftermath of the earthquake.

“I’m waiting for a miracle,” she says. 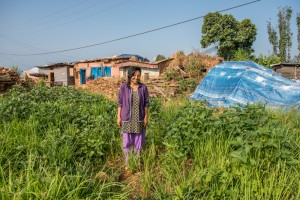 Shobha Dangol, carried her 93-year-old mother to safety when the earthquake struck the village of Nuwakot

Dipkumari’s situation is typical of thousands of villagers in the Kathmandu Valley. The earthquake killed more than 9,000 people, leaving hundreds of thousands homeless and flattened whole villages. Many of these resemble war zones, with rubble piled up on either side of roads, vegetables growing where homes once stood, and those still standing patched up with tarpaulin. People still live in temporary accommodation as if in a mini-refugee camp.

“I was sleeping on the first floor and I had a matter of seconds to save myself,” says Shobha Dangol, a 45-year-old government official from the village of Nuwakot, which was some 30 kilometres from the epicentre of the earthquake.

“Luckily I escaped. I carried my 93-year-old mother out and hid behind the house,” she adds. “I felt like everything was falling apart, dust was everywhere in the air, houses were falling down and the earth was moving.”

Like Dipkumari, she received 20,000 rupees compensation. It cost more than that – 25,000 rupees ($240) – just to clear away the debris, and a further 46,000 rupees ($440) to build the temporary accommodation, reusing the old timber wherever she could, where she lives with her mother and ten other family members, providing for them from her monthly salary of 12,000 rupees ($115).

“Before we built this accommodation, the entire village was living in one tent,” she explains. “When a strong wind came, we were all holding the tent and trying to stop it from flying away.” 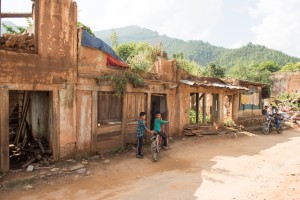 The village of Hattigauda was devastated by the earthquake

Still now, the cramped living conditions are far from ideal. Too hot in the summer, the cold winter months from December to February, will intensify the risk of illness and disease. Her two-year-old niece is already sick, although we are only in October.

Every house in this picturesque village, which was proposed as a UNESCO World Heritage Site prior to the earthquake, has suffered damage to a certain extent, according to Narayan Mansingh Dangol, 70, a former priest at the village’s 500-year-old temple, itself practically destroyed by the earthquake.

Narayan is angry about the lack of response from the government. Much of the money pledged by other nations in aid has failed to find its way to those in most need.

“There are people who are totally incapable of building their new houses,” he says. “At least for them the government should intervene and build their houses and take care of them.”

Nildevi Thapliya, 71, claims that many people in the village have yet to receive any money. She had three houses, all destroyed by the earthquake. Her compensation was 15,000 rupees, which disappeared in clearing the debris of her former homes. Now she lives in a temporary house on the outskirts of the village, living off the rice she had stored and the vegetables she grows on her land.

“I can’t even cry. I have nobody to stay with and I can’t die either. My tears are finished,” she says. 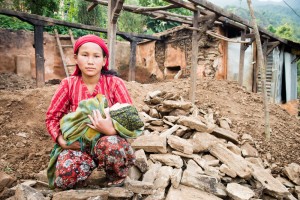 Ranjita Tamang, 18, with her three-month-old baby, Hero, in her arms.

The earthquake did not discriminate between old and young. Ranjita Tamang, 18, was six-months pregnant at the time the earthquake struck her village of Kallabari. “I was cooking and the stones started to fall, and luckily I escaped,” she says, sitting with her three-month-old baby, Hero, in her arms.

As if losing her home, were not enough, her fellow villagers forgot to register her name when they submitted the compensation form. As such, she did not qualify for the 15,000 compensation provided by the state, only receiving 7,000 from the municipality.

“I don’t know where to claim the money,” she says. Now, she relies upon the casual farm labour her husband can find to feed her young family. “It’s pretty hard to get work in the village,” she explains. Even then he only gets 400 rupees – just less than $4 – per day.

The stories we encounter seem endless. The resignation of the villagers seems something out of a play by Samuel Beckett, as if they are waiting for something they know will not turn up, like Godot.

Lil Bahadur Ohja stands open armed the look of resignation clear all over his face.

“What else can we do?” The 58-year-old former government employee and driver says to us. “We are not expecting money. We know the money is there, and we want it badly, but we know the government will never give us the money.”

Resignation is mixed with anger. The villagers know that many countries have pledged money for their relief – although they have little idea of precisely how much. 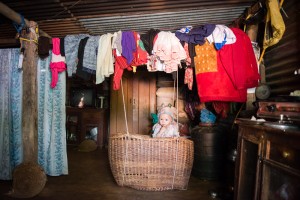 A young survivor in Kallabari

The UK’s DEC Nepal Earthquake Appeal announced in May that the money donated by the UK public had reached £50 million ($75 million), in addition to the £33 million ($50 million) committed by the UK government in May.

The Wall Street Journal reported in June that governments across the world have pledged billions of dollars in aid and grants, with India ($2 billion), China ($760 million), Japan ($260 million), the US ($130 million) and the EU ($112 million) leading the way. In addition the ADB and World Bank have promised a combined $1.1 billion in low-interest loans.

Yet the only signs of aid reaching these villages are sacks carrying the logos of Oxfam, Save the Children and other aid organisations that brought in emergency provisions of rice shortly after the earthquake struck, and corrugated iron shelters that are now used to store food.

Seemingly none of the money raised has reached the 10 villages we visited in this isolated stretch of the Kathmandu Valley.

Money is stuck in a well-publicised bureaucratic logjam. In May the government promised loans of up to 2.5 million rupees (around $24,000) for earthquake victims in the Kathmandu Valley at 2 percent interest, although later this was rejected by private banks, and a revised figure of 4 percent was mooted.

All the farmers are waiting for the 4 percent loan to become more than a vague promise. When asked they respond that they would take up the offer. The loans would act as an essential economic stimulus. Money paid to the casual labourers to build the new houses would help stimulate the local economy and create much needed demand in the local markets. 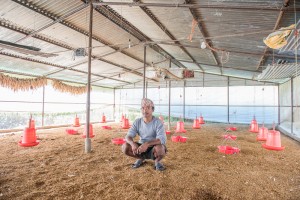 Dhaku Narayan Shrestha in his chicken farm in Kalyanpur Kagumi

Tragedy and farce merge as we meet Dhaku Narayan Shrestha, 55. He mortgaged some of his farmland a month prior to the earthquake for 700,000 rupees ($6,650) in order to build a chicken farm in the village of Kalyanpur Kagumi.

Now, his home a pile of rubble, he lives in the chicken farm, built with corrugated iron and wooden frames, that managed to survive. The front he has turned into a small shop, the middle are living quarters, and the chicken are at the rear.

Both his sons have left home, seeing no future in the village. “What else can they do?” he asks. “If they don’t see a future here they have to leave.” 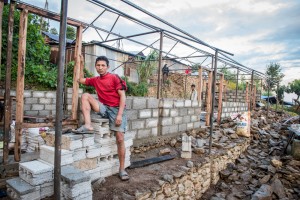 Bhadra Singh Tamang, 33, has not missed the lesson of the chicken farm that survived the earthquake.

Like many in the village of Purano Pani, he lost his home in the earthquake, and moved to temporary accommodation, where he and his family still live. But unlike the others he was not prepared to hang around endlessly for a miracle to appear.

“I waited a long time for the aid to come from the government but I gave up,” he says

Borrowing 150,000 rupees ($1,400) from a private financial company in Trishuli at 17.5 percent interest per annum, he raised the money to build a new house. Using the stones from his old house as foundations, now he is building a modern house with breeze blocks, steel supports sunk in concrete, wooden walls and corrugated roof. It might not be as aesthetically pleasing as the traditional houses that collapsed during the earthquake, but it is designed with one intention in mind.

“I just wanted to build a house that can withstand an earthquake,” he tells us. It’s also cheap. Bhadra estimates the six-room, single storey house will cost 400,000 ($3,800) when labour is taken into consideration, and he estimates the project will be completed before winter, taking between one and two months in total.

“I tried to convince other villagers and they all said, ‘You try first and we will watch the outcome’,” he says.

“I will die in this house, but not in an earthquake,” he adds confidently. “I’m not going to die buried under a plank of wood.”

By the end of our short trip, we have collected quite a following, as no one has seen any foreigners for months.

Back in the village of Ajingare, we share some tea with the villagers. A group of men sit with us, as well as one young woman, Lil Bahadur Ohja’s daughter, Sharmila, aged 18. I relate to them Bhadra’s enterprising spirit, and they all seem interested until they hear that he is paying 17.5% interest on his loan.

“Future?” Sharmila laughs. “The future is nothing. The future is farming. Before everything was perfect. Now we have to begin again from zero.” 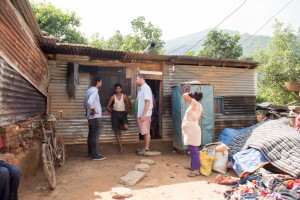 It is only now that I realise what I myself am doing here. All these people have a tale they want to tell and until we arrived unannounced at their village, they had nobody to tell it to.

My mind returns to Nildevi Thapliya, the old woman we had first encountered at Nuwakot a couple of days earlier.

“I want my story to be listened to,” she had said to us then. “But there are lots of stories like mine, so that nobody can hear all our stories.”

At least now their story has been told.