The Solitude of Travelling 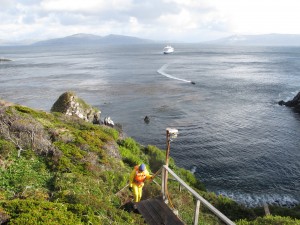 The long walk up Cape Horn

Travelling to the bottom of the world, Mark Bibby Jackson discovers that sometimes the end can be the beginning of something quite special.


Sitting at the end of the world in an Irish bar listening to The Doors’ Painted Black while The Simpsons, dubbed in Spanish, is screened unheeded by all customers in the background, I find myself wondering what has become of the solitude of travelling? When I first started travelling over twenty years ago, the world seemed a vast and unknown adventure, now it seems one homogenised playground for the young and tattooed.

Depending upon your perspective, Ushuaia is the end of the world but also the beginning. Set at the tip of Argentina on the island of Tierra de Fuego, it’s the most southerly city in the world – although the nearby Chilean ‘town’ of Puerto Williams might dispute this claim. For centuries, It has been the refuge for many a sailor from the brutal winds that have cost so many lives. The town can have three seasons within an hour as snow is replaced by sun with an alacrity that puts tropical storms to shame. However there are really only two seasons – winter and more winter, as one local explained to me – with the temperature hovering scarcely above freezing point even in December.

The Dublin Irish bar is full of young backpackers; some have come to the end of their lengthy journey across the continent, others are only just to begin their voyage. Many are taking advantage of last-minute deals to visit the ultimate continent – Antarctica – with berths in a triple cabin costing as little as $4,000 for a 10-day round trip. There’s a buzz in the bar, but also an atmosphere you can encounter in any of the ‘Irish’ bars dotted around the world, excepting the Emerald Isle itself.

Destinations like Ushuaia and Antarctica, a distant dream when I started my personal travel around the globe are now relatively easily accessible and affordable to the many. While this is good news for both travellers and the locals who depend on the income that tourism brings with it, there is an accompanying loss of the solitude that drew many to travel in the first place. For this I blame the Lonely Planet, which sadly has helped make its title extinct. 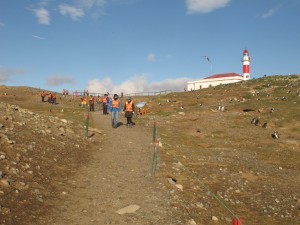 The lighthouse on Magdalena Island

Yet, it is solitude, albeit relative, that the owners of Australis promise. The company runs weekly cruises between Ushuaia and Punta Arenas in neighbouring Chile, travelling to Cape Horn and through the Magellan Straits along the way. Relative solitude, as you have to share it with up to 200 fellow passengers, although our boat contained less than 100. But on board there is no internet, no TV, no mobile phones; it’s like a floating retreat only without the yoga and meditation.

“We did consider introducing WiFi and TVs a few years ago,” explains the company’s tour leader Mauricio Alvarez. “But the passengers enjoy the peace and solitude.”

Sailing through the night, our first port of call is Cape Horn itself.

The passage is quite rough, but no worse than the crossing from Ireland to the UK mainland. We fear that it might be too choppy for our Zodiac boats to make a landing, but as we approach the most southerly island in the Americas, the winds calm and we are able to follow the paths of many a shipwrecked sailor.

The post of lighthouse keeper on Cape Horn must be one of the most solitary jobs in the world. He is awaiting us in his Chilean naval uniform as we approach seeking relief from the chilling wind that has cut through my wind protector as though it were a flimsy disposable plastic poncho.

There is not much to do on the island apart from walk to the monument that commemorates lost sailors and sign the book in the lighthouse, but at least I have been here – another notch on my travelling bedpost.

We return to the boat after a slight diversion to see a pod of seals basking on an outcrop of rocks. Our cameras flash away at the dismissive creatures.

Drifting on, our only companion, just like the Ancient Mariner, is an occasional albatross following our course diving in the icy waters to catch its dinner. A possible sighting of a dolphin might be a trick of the light, but there is no sign of human activity outside of our boat.

Australis assures its two cruise ships are the only ones that plough these channels. And true to its word, apart from around Ushuaia, the only vessel we spot on the first two days of our cruise is our sister ship passing in the opposite direction. 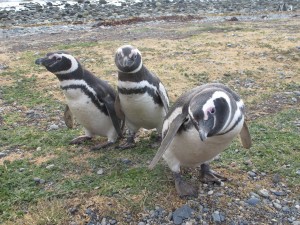 “Wot you looking at?”

The second stop is at Wulaiai Bay on Navarino Island, scene of a massacre of missionaries by the native Yaghan in 1859.

In the 1830s Robert Fitzroy, the captain of HMS Beagle came to these parts and returned to England with three local Fuegian children he had seized as hostages determined to turn them into good Christians. They soon became celebrities even visiting King William IV.

Fitzroy returned a year later with the three Fuegians and a young botanist called Charles Darwin on the Beagle’s second voyage. While Darwin was to return to write his theory of evolution, Jemmy Button remained on Navarino having rejected London society for his “young and nice looking wife,” as recorded by the young botanist. Speculation is that Button led the massacre of the missionaries almost 30 years later.

Nothing remains of that time, apart from a small museum and an infestation of beavers left behind by ambitious settlers who thought they would make their fortune introducing the animals to the region for their fur. Sadly for the local environment, which suffers from the dams the animals build, their venture failed.

“People feel attracted to the history of this place,” Alvarez assures me once we have returned on board.

By night we sail through the Beagle Channel before reaching the Aguila Glacier, left stranded once the last Ice Age had melted away. The short walk to the creaking ice is pleasant enough, but nothing compared with the Perito Moreno, further up the mountain range in Argentina.

However, I yearn to return to our boat and continue my vigil, staring out across the waters into nothingness.

By the end of the second day, thoughts of internet and cellphones become as distant as the telegraph and gramophone, as I settle into a familiar rhythm. Occasional conversations with my fellow passengers interrupt my solitudinous reverie, some are more welcome than others. The flow of my daily routine becomes as natural as the waters that crash into our ship’s bow.

We wake early on our third and final day to take the short trip to Magdalena Island in the Strait of Magellan, home to a colony of over 100,000 Magellan Penguins. Walking along the path beside the small birds nesting with their young in holes dug in the soil, is the highlight of the trip.

As I stop to take some photos, three penguins come up to me, staring as I point my lens straight in their faces, seemingly as bemused by my actions as I am by theirs. Only in Galapagos some 15 years ago have I encountered animals so lacking in fear of man.

For the final time, we return to our boat, for one last breakfast and then to pack our bags wondering whether we will recapture such solitude again.