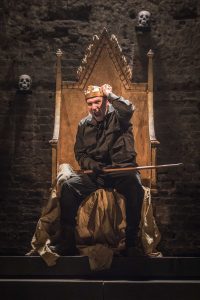 The city of Leicester has been in the news in recent years and not just for the unexpected success of its football team. A skeleton unearthed beneath a car park there in 2012 was found to be that of Richard III. Rupert Goold’s rendition of Shakespeare’s play of the same name, currently performing at the Almeida Theatre, starts with the media reporting of the discovery of his body. As Goold says in his programme notes it is a moment “where history, literature and science intersected.” It also presents an opportunity to reassess one of the Bard’s most infamous villains.

History has not treated the former Duke of Gloucester kindly, no doubt coloured by Shakespeare’s dark portrayal. In addition to being responsible for ordering the murder of his brother and nephews – and numerous others – now can be added that of raping his sister-in-law, graphically performed on stage. Ralph Fiennes’ Richard is the very embodiment of evil, bringing out both a coarseness and humour that captivates us. From the outset, his interchange with the audience resembles Kevin Spacey’s Frank Underwood in House of Cards. He is equally beguiling.

Fiennes steals the show letting the other characters fight over the scraps, although Finbar Lynch makes for an excellent Duke of Buckingham, and Aislin McGuckin seems to grow into the role of Queen Elizabeth as the play progresses, particularly as she struggles with a concern for the safety of her daughter and repugnance towards the man who has killed her sons.

Richard III is playing at The Almeida Theatre until 6th August and then on tour to Croatia as part of the Ulysses Theatre Festival from 11th to 13th August. For more details visit http://www.almeida.co.uk.