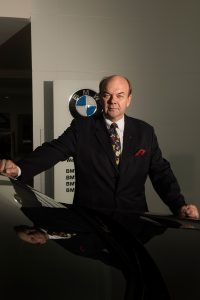 A friend of mine recently told me how he was amazed to see three Rolls-Royce Phantoms all in a line on his first visit to Phnom Penh last year. While this is by no means an every day occurrence on the streets of the Cambodian capital, the last few years have seen a marked rise in the country’s luxury car market.

Roll-Royce opened its first official dealership in the ASEAN country last year, looking to the long-term. “Cambodia is an emerging economy, with good potential in the years ahead but we have no desire to see a Rolls-Royce on every street corner of Phnom Penh,” Paul Harris, Asia Pacific regional director of Rolls-Royce Motor Cars, says.

Recent years have seen a steady 10 per cent growth in the number of imported cars, although 2016 has seen a decline across the industry, according to the Cambodian Automotive Industry Federation (CAIF), which represents the country’s authorised dealers.

The recent decision by the government to increase the rate of taxation levied on luxury cars imported into the country from 50 to 60 per cent could jeopardise this. For example it’s estimated that the price for the highly popular Mazda Cx-5 would rise from $52,900 to $55,900.

Harris believes the move could have a negative impact on the country’s development. “Negative taxation increases simply defer investors to other places,” he says. “The super-luxury retail industry is still developing in Cambodia and our wish would be to see that it continues to provide jobs and services for the country.”

However, Michael Vetter, the CEO of Precision Cars (Cambodia), Porsche’s official importer, says the tax hike will have little impact on his market.

“Porsche customers are relatively less price sensitive, so the effects of an acceptable rise of import taxes would not be as harmful to our sales as it might be to others,” he says.

Vetter is much more concerned that “the government ensures a level playing field”. This is a reference to the country’s large grey market, where cars are imported second hand – sometimes as scrap – and then re-sold within the country. Unauthorised dealers often avoid paying taxation such as the 10 per cent VAT.

According to the CAIF, Cambodia has the biggest, unregulated grey market in ASEAN, and, apart from Myanmar, is the only country in the economic bloc without any limits on importing grey cars.

“With 40,000 cars imported per year, the grey market is 10 times larger than the official one,” says CAIF President, Peter Brongers.

This April, the CAIF launched an awareness campaign, #SameSameButBetter, with a dedicated Facebook page to advise consumers on the benefits of buying authorised cars.

“It is now time for the automotive industry to advise and warn customers about the privileges, safety and peace of mind that they will get upon purchasing vehicles from the authorised dealers,” says Brongers.

He is concerned by the lack of “real inspection” carried out on cars upon arrival. Many might have serious safety issues. Brongers estimates that 20,000 of the 250,000 cars written off after Hurricane Katrina in 2005, ended up in Cambodian showrooms.

“The CAIF knows of ‘new’ Audi Q7s sold on Monivong Boulevard [in Phnom Penh] to be flood damaged cars, cleaned up and imported as new, but the electronics will get a problem, as will the engine,” he says. “Now if something happens with these cars, people will look at the brand and not the history of the car.”

Sorya Pum believes the solution is to ban the import of used cars. “Cambodian customs could start by enforcing the law and reject any cars coming into the country disassembled or taxed under scrap steel tariff,” says the managing director of MG, which opened its first dealership in Cambodia in May 2014.

The unregulated grey market is a major factor deterring MG from establishing a production line within Cambodia, despite government tax incentives.

“We will invest once we are sure the government takes positive steps to promote the authorised dealers over the grey market,” he says. “Now, this is just too risky.”