Once in A Lifetime Opportunity 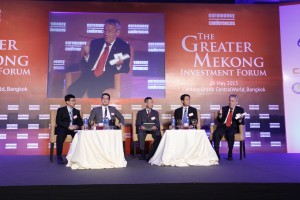 At the Greater Mekong Investment Forum in Bangkok, experts agreed that Thailand had a unique opportunity to secure its place at the centre of the sub-region.


“This is a lifetime opportunity for Thailand to capitalise on and to transform itself,” said Kamalkant Agarwal, in a debate on the opportunity that the Greater Mekong Sub-region presented the country with the advent of the ASEAN Economic Community at the end of 2015.

“It [Thailand] needs to transition, as its wages costs go up, from being less low-cost manufacturing to higher value added and becoming more of a service-type economy,” the Head of International Banking Business, Siam Commercial Bank, added. “And I think that the CMLV (Cambodia, Myanmar, Laos and Vietnam) platform offers exactly that to Thailand, and it is for Thailand to lose.”

The discussion was part of a series of panel debates about the region with specific focus on the so-called CMLV countries at the fourth Euromoney Greater Mekong Investment Forum held on May 28. For Agarval, you do not have to look far for inspiration for the model that the country should adopt.

“Thailand can become the Singapore for CMLV if it provides the connectivity, the support, the transportation that is needed for these economies,” he said. “I think there is a huge opportunity for Thailand to capitalise on.”

Kobsak Pootrakool, Executive Vice President, International Banking Group of Bangkok Bank, stated that many of his clients had already realised the growing opportunity the region presented as it continued to open up. “They can not stay in Thailand alone, they have to go out and catch the opportunities and then bring [them] back,” he said at the debate before comparing the sub-region to a highway. “The road is finished, the gateway is opening up … and the traffic is there.”

The expert panel that included HE Sorasak Pan, the Cambodian Secretary of State for Commerce, Boonchai Opas-iam-likit, Chairman and Managing Director of BASF Group Thailand, and Jingjai Hanschanlash, Honorary Chairman of the Greater Mekong Sub-region Business Forum agreed that trade liberalisation of the region offered great opportunities for countries to maximise their comparative advantages. While Thailand has the technology and management skills, the CMLV countries have lower wage costs and a large market. Regional companies are increasingly using Thailand as their base before moving to Laos, Myanmar and Vietnam.

“Thailand is playing a very important role on the growth of trade and investment [in the region],” said HE Sorasak Pin. “It has large industrial clusters. The cross-border supply chain originating from Thailand is expanding and connecting to countries to the North.” Boonchai Opas-iam-likit compared the region to an orchestra with Thailand acting as its conductor.

Agarwal welcomed the keynote address made by Thailand’s Deputy Prime Minister HE Pridiyathorn Devakula to open the forum. “I think the thought process of the government is in the right direction,” he said. “It’s a huge opportunity for Thailand.”

According to him, it is not just in trade where Thailand is strongly positioned to lead the CMLV countries. The kingdom’s strong banking and capital market sectors also represent a realistic alternative for countries when considering where to list. “Make them think Thailand rather than Singapore,” he urged his fellow bankers with the aim of becoming the regional capital market and banking centres.

Over 700 delegates attended the one-day forum held at Bangkok’s Centara Grand, reflecting the continued interest international investors have for the region, according to organisers Euromoney.