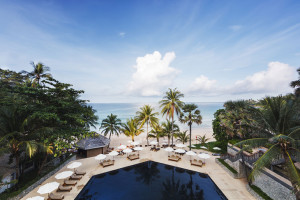 The ASEAN Tourism Forum (ATF) presented the opportunity for Thai hotel groups to showcase their wares in front of buyers from across the world.

The 2015 ASEAN Tourism Fair (ATF) presented the perfect opportunity for Thai hotel brands to reach a targeted market. Held in the Myanmar capital of Nay Pyi Taw from 22 to 29 January, the event brought “sellers” from across the region to meet potential “buyers”, which included global tour companies and travel agents.

The theme of this year’s ATF was ASEAN-Tourism Towards Peace, Prosperity and Partnership.

Songsri Toperngpong, vice-president Sales and Marketing for the Sukosol Hotel Group, said the event afforded her the chance to explain the hotel groups range of products to potential buyers. The group founded by Kamala Sukosol features the Siam Bayshore and The Bayview in Pattaya as well as the Wave, The Siam and the flagship The Sukosol hotels in Bangkok.

Toperngpong believes that the ATF offers better business networking opportunities than global events such as the ITB in Berlin this March, the ATF was targeted at the ASEAN region. “The ITB is the whole world,” she says. “The ATF is focused on Southeast Asia. Everyone knows this fair has no European hotels, only from Southeast Asia, so the people who would like to have the product from this region they will come.

“We come here because we will meet travel agents, DMCs [destination management companies] and companies that need suppliers of hotels that they can use for their customers.”

Toperngpong added that she would meet some 20 to 30 buyers over the three public days of the fair, and then follow those contacts up upon returning to Thailand.

Thawee Kugasemrat, the Director of Sales and Marekting of the Mode Sathorn, agreed that the ATF was a good opportunity to meet buyers, to explore new markets and try to find new customers. “It represents the whole of the ASEAN region,” he says. “The buyers from Europe or wherever, they are shopping just for the region.”

Parallel to the ATF was the Eighteenth Meeting of ASEAN Tourism Ministers held on 25 January. Ministers from the member countries announced that preliminary figures showed 97.2 million international tourists to ASEAN in 2014, a growth of 3% compared with 2013.

Thailand saw 24.7 million arrivals in 2014, raising US$34.9 billion in tourist revenue. Under the theme of Amazing Thailand 2015: Discover Thainess, The Ministry of Tourism has set a target of 28 million arrivals and US$41 billion for 2015.

Back at the booths, the question was raised as to what Thainess consists of. Roland Aung, Hotel Manager of the Mode Sathorn, felt that Thainess represented the nature of the people. Although born in Myanmar, he has worked in Thailand for 20 years. “Thai people they are very nice, they are willing to help and they smile,” he says. “You see that in Thai society every day.”

Toperngpong claims that this is at the heart of the Sukosol ethos. “We treat customers like they are part of the family,” she says.

Despite a problematic 2014, everyone seemed positive about 2015. “The trend is coming back. The high season is picking up,” says Aung. “January and February are fully booked.”