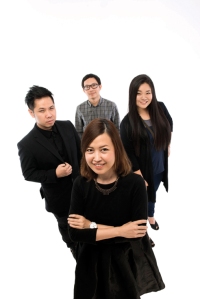 The country’s furniture industry may have a regional reputation as an export production house, but a group of young Thai designers is determined to change all that. Words by Mark Bibby Jackson. Photos by Nick McGrath.

Fun is not a word that you might readily associate with Thailand’s furniture designers. But the term immediately springs to Ploypan Theerachai’s mind when asked to sum up Thai design in two words. “And surprise,” she adds without pause.

Her partner and now husband, Decha Archjananun, is somewhat more circumspect. “Craft and industry,” he responds to the same question.

Together, the pair form design studio Thinkk, which won the Furniture Designer of the Year Award 2013 at the 36th Bangkok International Gifts (BIG) and Bangkok International Houseware (BIH) Fair in October. Theerachai regards the prize as “the biggest award for designers in Thailand,” adding that “it’s proved that we are on the right direction and we would like to continue working hard.”

Both believe, however, that Thai designers have yet to find their feet on a regional or global stage. “In Asia, if we think about design, we think about Japan, Korea, maybe Taiwan, but not Thailand,” says Archjananun.

The industry has, to a certain extent, become a victim of its own success. Thailand has an abundance of factories pumping out furniture for export overseas. According to statistics from the Thai Furniture Industries Association, exports of furniture and parts amounted to some US$1,142.54 million in 2012. Around 40 percent of this (US$462.67 million) was wooden. The main markets were Japan, the EU and the US.

Yet when Thais think about quality furniture “they think of overseas,” at least according to Anon Pairot, founder of his eponymous design studio.

So is there an opportunity for young Thai designers to fill this hole in the market, by providing well-designed furniture for domestic consumers and even overseas customers? Pairot certainly believes so, though it’s one where factories conditioned to producing knock-down furniture for Japanese companies and more recently IKEA may fear to follow. “They are afraid to change because they do not know how to create another thing,” he says.

The man tasked with changing that attitude is ML Kathathong Thongyai, director of the Thailand Institute of Design and Innovation Promotion. He believes that Thai designers, such as Pairot, Theerachai and Archjananun, are “on a par with the international scene” at least in terms of creativity.

What had been missing was the bridge between good design and business. “What they lacked was the opportunity to show off their potential,” he says.

This is where Thongyai’s department came in. Established some 20 years ago, it initially set about creating awareness of good design, but has since developed into supporting businesses in project development and using design to create brands.

“We were the intermediary. We were the agency that was in between the manufacturers and designers,” he adds.

Thongyai believes that the country’s tourism industry has helped to increase knowledge of Thai creativity, at least within western markets. “Thai design is different, it’s exotic, it’s creative,” he says. However, Thai design is not so well known within ASEAN, he adds.

This is part of the reason that his department has supported schemes such as Thailand Design Leaderships 2013, which Thongyai himself launched in Bangkok last September. A committee of representatives from across various creative industries selected designers as the best of Thailand. “How better to show off our potential than to take the leaders of each creative industry and show them off?” he says.

One of these leaders is Pairot, a winner of several international awards including the prestigious Red Dot, whom Thongyai praises as one of the country’s leading lights. The other reason for the scheme is for them to act as role models for the country’s younger designers.

Another scheme in which Thongyai is closely involved is DEmark. Introduced six years ago and run in cooperation with the Japan External Trade Organization (JETRO) and the Japan Institute of Design Promotion (JDP), it not only promotes the best-designed Thai products but also tries to change the perception of Thai design both within the country and overseas.

“We take our DEmark products and exhibit them in Japan [Good Design Exhibition, 2013] and it’s so different,” he says. “If you are constantly bombarded with smartphones and TV monitors and electronic goods all the time and suddenly you see this piece of rattan furniture, obviously you go and have a look at that. The Japanese like Thai design.”

As we are talking, Thongyai hands me a plastic water bottle – one of more than 1,000 products that has received DEmark recognition. On close examination it has a honeycomb design that lets it stand out from the crowd, as well as making it more difficult to slip out of your hand.

“You can buy it for 7 baht at 7Eleven,” says Thongyai, adding that the new design has increased the product’s value threefold without increasing its retail price. “Design does not have to be expensive. It can be on a low to middle market range as well, but it does have to add value.”

Thongyai’s focus for 2014 is on innovative green products – an area that Pairot has recently turned to. Currently working with communities in Lampang and Chiang Mai in northern Thailand, he is producing a range of bags made from leaves collected from local forests. They are dried and then stitched in accordance with his design. It is something he refers to as “tropical minimalism,” where you find simplicity from nature.

It also helps to preserve trees. “If they [the villagers] want to have a good quality of leaf then they need to take care of the tree, of the forest, of the whole ecology,” Pairot says, adding that villagers previously burnt down forest in order to find wild animals to eat or export overseas.

Environmental concerns are also a key ingredient for fellow designer Saruta Kiatparkpoom, who works under her nickname PiN. “I was the youngest in the family business,” she explains, adding that her parents have a factory that makes sliding doors and other sheet metal parts.

This provided her inspiration. “I found meaning from everything in the factory,” says the designer, who transforms factory off-cuts into objects that are as much works of art as household accessories. “I use feeling in design, not function,” she explains. “It is opposite to other designers.”

It is an attitude that sets her apart from her fellow designers, all of whom stressed the importance of functionality in their work. For instance, Archjananun was at pains to point out that the design of a vase – an unusual combination of concrete and metal – that he completed as part of his graduate project in Lausanne, Switzerland was determined by its dual functionality. The concrete base holds the water, while the metal top keeps the flowers upright. The vases have now been put into production by French company Specimen Editions.

All these designers have benefitted greatly from the support that the DITP gives to young Thais. PiN, Theerachai and Archjananun were all part of the department’s Talent Thai scheme, which promoted young designers, as well as benefitting from the space afforded to them at BIG and BIH. “It [BIG/BIH] is a very good opportunity for us to meet people who want to buy our work or factories who want to hire us for design,” says Theerachai.

Another organisation that has helped develop young Thai designers is the Thailand Creative & Design Centre (TCDC). When we meet, PiN is at a fair held at the IMPACT Arena, Bangkok, where the TCDC has provided space for young creatives to showcase their products. “TCDC helped me to develop products,” says PiN. “Now I sell them at the TCDC shop.”

Despite their differences, many young designers are influenced by their mutual cultural heritage. Theerachai believes it is the shared culture that “comes from within” which makes Thinkk’s work quintessentially Thai. Archjananun adds that some elements of their design are based on traditional Thai furniture, while PiN derives much of her inspiration from Thailand’s many temples.

But despite this shared culture and the governmental support afforded them, these young designers are still waiting for Made in Thailand design to make its breakthrough.

This is something that Thinkk plans to change. “People look at our design and they like it,” says Theerachai. “They are surprised when they know we are Thai.”

With four or five companies already on their client list, the couple aim to develop their own brand further and believe the timing is ideal for such a move, not only overseas but also domestically.

“Now Thai people are more concerned about the design,” says Theerachai. “Before they were only concerned in price, and quality of material, but now design in Thailand is getting better.”

Pairot agrees. He believes that the ASEAN region lacks a truly strong furniture brand name. Thailand has a good brand for food and tourism already. “We have the opportunity for that [brand name] in design too,” he says.

Returning to my original question, I ask Thongyai what Thai design means to him. “Creativity and culture,” he replies. Perhaps this distinguishes Thai designs from others within the region.

“We should celebrate our culture, we shouldn’t look at it as an obstacle,” Thongyai adds. “It is ingrained in the DNA of every product that is designed by Thais.”

When I inform Thongyai of Theerachai’s answer to the same question, he smiles back at me. “To be fun-loving is part of our culture,” he says. “That’s the allure of Thailand and that’s why people like Thai products.”

For more information on the designers mentioned in this article, visit: