One Year of a Crime Wave 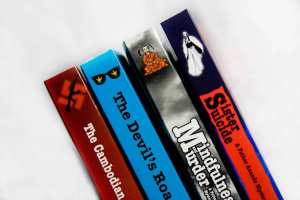 Following on from his initial interview with Tom Vater in AsiaLIFE Thailand, Mark Bibby Jackson catches up with Crime Wave Press publisher one year on.

Tom, how has the year gone?

Our first year in business has been a hell of a ride and Hans Kemp and I are hugely surprised by the positive reaction to our output. We have published seven titles so far, covering thrillers set in Japan, Burma, The Philippines, Nepal, Thailand and Cambodia.

Can you give some examples of the books you have published?

The Devil’s Road to Kathmandu, a novel I wrote a decade ago, was our first title. I managed to get the rights to the book back and as soon as we republished the novel, Editorial Xplora purchased the Spanish language rights and the title was published in print and as an ebook in Spain in early 2013.

The Cambodian Book of the Dead, our second title was snapped up by British publisher Exhibit A Books and has since been published worldwide to sterling reviews. We officially launched Crime Wave Press at the prestigious UBUD Writers and Readers Festival in Bali in October 2012 and were off to a flying start.

How successful have the books been?

Apart from the latest Father Ananda title, what plans do you have for the future?

We are currently talking to a film director about optioning one of our titles and are negotiating with European publishers for further foreign rights contracts. Crime Wave Press will be present at the Frankfurt Book Fair this year.

What has been the greatest problem you’ve encountered so far?

Finding great manuscripts has been our major challenge. Our slush pile is clogged with bar girl novels and fictional reminiscences of the American Wars in Asia. Of course, we consider publishing any exceptional crime fiction title, irrespective of the milieu or historic period it’s set in, but we set the bar high for readability and 95% of submissions we receive don’t make the grade. This should not be perceived as discouragement. If your book is good and we think we can sell it, we will publish it. We would love to receive crime fiction from India, China, Korea and Japan and we now also consider novellas and True Crime titles.

So you are still seeking submissions?

Absolutely! Crime writers, authors and wordsmiths, take a look at our submissions page, check out our titles and send us your manuscripts. As our company slogan says, ‘It’s always too late for someone.’ It better not be you!